Rhizosphaera needle cast is a fungal disease afflicting spruce trees which causes their needles to turn brown and then fall. In Minnesota, white spruces, Colorado blue spruces and Black Hills spruces are all susceptible to Rhizosphaera.

After a spruce has been infested with needle cast, its needles will only last for a year or less. By contrast, the needles on a healthy spruce tree should last for 5 to 7 years. The needles of an infected spruce will first appear to be speckled with dull yellow blotches before turning purplish brown.

Black fruiting bodies of Rhizosphaera will begin to appear on the stomata of needles. As the disease progresses, spruce trees will thin out and drop their needles while lower branches will die back significantly.

If Rhizosphaera needle cast is diagnosed early on, measures can be taken to avoid major damage to infected trees and to prevent the disease from spreading to other trees. When treating your spruce trees, focus on protecting new growths. Fungicides are most effective when applied to emerging needles that are half-elongated. Fungicide treatments will suppress Rhizosphaera but will not cure it outright.

It may take several years of treatment to get needle cast under control in heavily infected spruce trees. To prevent the spread of Rhizosphaera, it is important to reduce moisture around infected spruces. Remove overhead sprinklers, increase airflow through the canopy and raise infected trees off the ground to prevent reinfection. 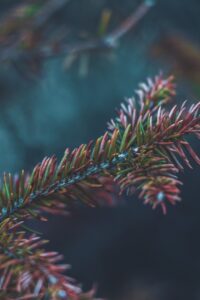