Japanese beetles are an invasive insect species that feed on over 400 species of native plants, including many trees and shrubs found in Minnesota. Plants commonly targeted by Japanese beetles include: 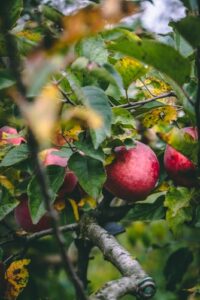 Japanese beetle larvae can survive Minnesota's winters by burrowing 4-8 inches beneath the soil. During a 3-4 week period during the summer, adult beetles will emerge and release pheromones to attract mates. This initiates a cycle of feeding on plants and mating, during which female beetles will lay 40-60 eggs in the soil. After 1-2 weeks, the eggs will hatch and the larvae will feed on roots before overwintering.

Japanese beetles feed on all varieties of plants, from trees and shrubs to vegetables and fruit. It is important to protect trees against early feeding, as Japanese beetles swarming around a tree will attract more beetles to the area. Soil applications of Xytect or Lepitect will not stop a beetle attack but will kill any beetles that ingest these systemic treatments while feeding. If you're trying to time your treatments, use a calendar of growing degree days (GDD). Adult Japanese beetles will usually begin to appear around 1000 GDD and finish feeding around 2100 GDD.